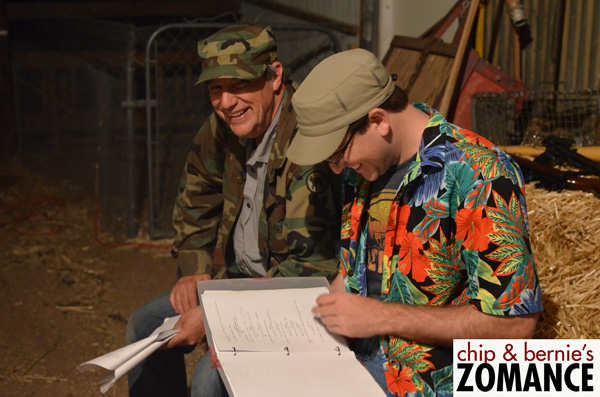 Chip & Bernie reading over the script

Principle photography ended as the sun went down on May 26th or as the cast and crew will remember it, when the wee small hours of the morning rolled in. It was a long and hard shoot but after getting through 98 pages in 6 days we all counted it as a success. I had the pleasure of directing over 100 actors in 13 locations as we all filmed “Chip & Bernie’s Zomance.” It’s the story of two brother in laws caught in the middle of a zombie apocalypse, to help the human race survive they are asked, with 5 other teams of 2, to be filmed as they fight off the undead. The team with the most zombie kills at the end of 72 hours will be known as, “The Greatest Zombie Killing Team.” Along the way Chip and Bernie are hunted themselves by fellow competitors, surrounded by zombies and learn that without each other they cannon survive.

I will be going straight into post-production, and work up until I start preparing for iSpotSanta.com‘s 4th year of production.