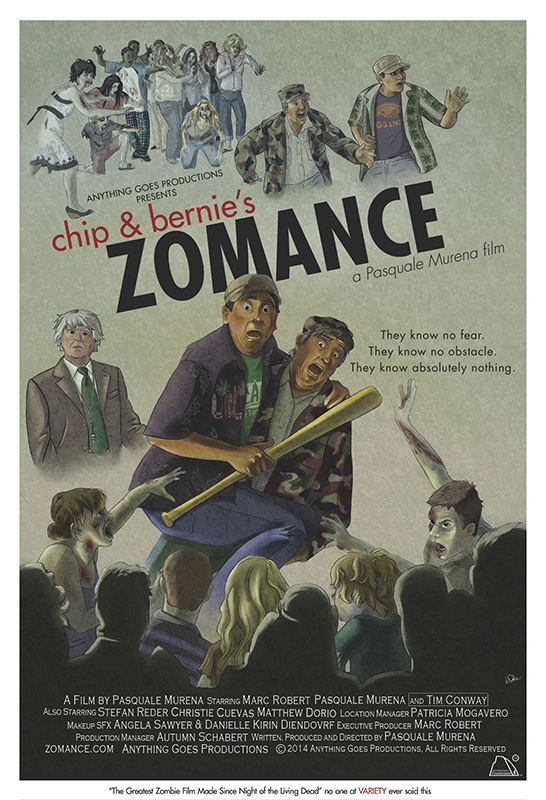 The Zombie comedy, “Chip & Bernie’s Zomance” has won awards in over a dozen film festivals, been screened in over 30 countries and has been the opening feature film in four prestigious festivals.

“Chip & Bernie’s Zomance”, takes the viewer straight into the middle of a zombie apocalypse. With humans caught unaware and unprepared, the zombies overtake most major areas of civilization. With zombies now outnumbering humans, survival and retaliation are essential.

To keep the remaining human population both connected to the outside world and educated on zombie killing techniques, a made-for-TV competition has been created. The competition rules are simple: Rule 1: Each team has 48 hours to kill as many zombies as possible. Rule 2: Don’t die.

“Chip & Bernie’s Zomance” focuses on one team in particular, exterminators Chip and Bernie. These two brother-in-laws are an odd pair but somehow the best of friends. Chip is an ideas man, always talking Bernie into one crazy scheme after another. Chip’s drive and humor stem from profound moments in his past and his unending love for Hawaiian shirts. Bernie always looks for the good side of Chip and is eager to put his trust in Chip’s often misguided plans. Their relationship is a constant balance of give and take, mixed in with lots of adventures.

This zombie film is streaming all over the world but the easiest place to watch this comedy gem is on Amazon.

You can even purchase a high resolution digital copy on Amazon so you can watch this schlock comedy again and again.

Visit Amazon to purchase and watch the film